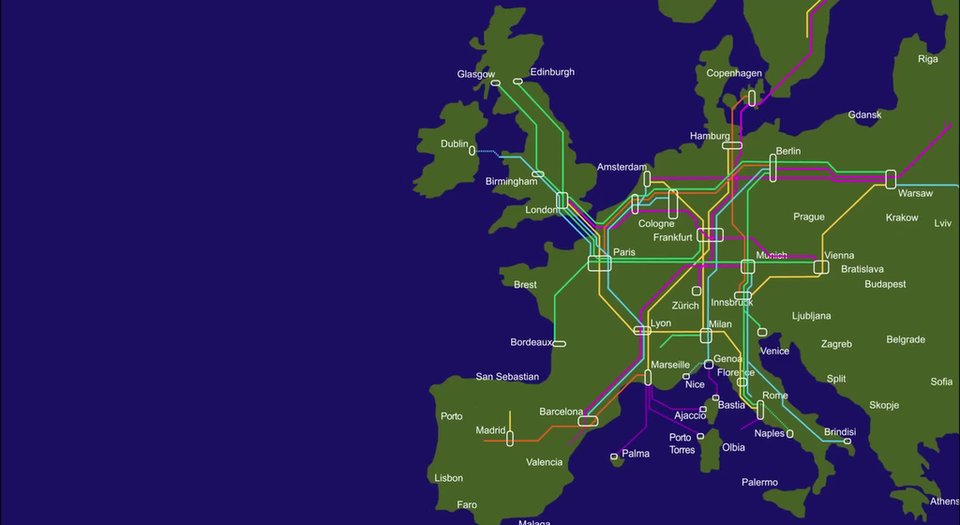 The German Green Party has unveiled plans for a trans-European night railway network, to connect the continent and diminish the environmental impact of planes. Frances Marcellin investigates whether a climate-friendly and affordable railway network can be achieved as an alternative to air travel by the end of the decade.

hen activist Greta Thunberg disembarked the now-famous “climate train” for COP26, she was greeted like a rockstar. Having travelled with hundreds of other climate change activists and NGO representatives, the train had started in Amsterdam and stopped in Brussels and London, before journeying to Glasgow.

This “Rail to the COP” campaign was organised by Netherlands-based non-profit the Youth for Sustainable Travel (YFST) to promote the European railway network as a solution for decarbonising European transportation systems. The train was the result of a partnership between operators YFST, Avanti West Coast, Eurostar, NS, and ProRail.

“To tackle the high emissions from the aviation industry – especially on short-haul flights – we have to find feasible alternatives for all Europeans,” says Lukas Kiefer, a 25-year-old board member of YFST.

The data is clear. Overall, transport accounts for one-quarter of the EU’s total greenhouse gas emissions, and while roads are responsible for 72%, and aviation 12%, rail transport contributes to only 0.5% of all CO2 emissions.

These figures and the need for low-emission mobility caused the German Green Party – who are in talks to form a new coalition government in Germany – to launch their vision for a far-reaching European night train network. From Helsinki in the north to Moscow in the east, Athens in the south and Dublin in the west, they hope such a proposition could be a reality by 2030.

The Green Party has five main goals for a European night train network. The first is that it must connect major European cities and holiday regions – they say that Germany, as a centrally-located country, could take a leading role. Secondly, trains should be comfortable and quiet, and third, passengers should be able to book on a standardised booking platform.

“Night trains will only be attractive if services that connect with the night train can be booked with one single ticket,” says Matthias Gastel, a member of the Green Party.

The Green Party also wants track access fees for night trains to be reduced and to ensure there is fair competition between air and rail.

The “climate train” carried hundreds of climate activists and NGO representatives from Amsterdam to COP26 in Glasgow. Credit: Avanti

“At present, international air traffic enjoys enormous tax advantages, airlines do not pay any tax on kerosene –railways do pay tax on diesel – and international airline tickets are even exempt from VAT,” says Gastel. “These distortions of competition must be corrected urgently – we need low-cost rail tickets that can compete with airfares.

Kiefer adds that “43% of airports require government aid to continue operations” and that sustainable mobility should rather be “supported with tax exemptions and subsidies” while these are “reduced for the aviation industry”.

The uncertainty surrounding the economic viability of such a network is not the only barrier. There are many obstacles to overcome before a climate-friendly and affordable railway network such as this could be achieved by the end of the decade.

Is the political will there?

According to Jon Worth, the founder of Trains for Europe – which is campaigning for a night train network in Europe – the biggest barrier is the “intersection between politics and how to operate a railway”. He says that given the long distances covered, such a network is an international matter and so the views of other countries’ politicians and railway companies are going to play a role.

“Even within Germany, it can be complicated,” Worth adds. “The German Greens will have to govern in coalition with the Social Democrats and Liberals and finding common ground on railway policy is not a foregone conclusion.”

With 27 countries in the EU, all with different national rules and 24 official languages, the political will for such a project would need to be extremely high.

Map of the Green Party’s vision for a night train network. Credit: The German Green Party

Josef Doppelbauer, Executive Director of the EU Agency for Railways, however, believes that political will is there.

“I see a strong will now, driven by the European Green Deal. And, there is also this Fit for 55 package,” he says. “I think there is also a significant amount of funding available now from the recovery and resilience funds, so the boundary conditions are better than they ever were, I’m tempted to say,” he adds.

He says that one aim of the Greens was to hold the transport ministry and then have the political power to push through their plans, but he also believes the desire to create strong rail networks exists outside of the Green party.

“Before the German elections I had looked into programmes of the other parties as well and I think most have supported the stronger role of rail, so it’s not an issue that divides the political factions, it is a proposal that could get further support from the Greens.”

For Doppelbauer, customer attractiveness is one of the most important criteria. While he can envisage take up from the younger, environmentally-conscious generation, for business travellers, the night train needs to have an attractive schedule, especially if it is going to be more convenient than flying.

I think most parties have supported the stronger role of rail, so it’s not an issue that divides the political factions.

The journey allowing for eight hours’ sleep, the train departing by 10pm, and arriving before 9am or 10am, are all important factors when choosing between a night train and a flight.

The question of what would happen to passengers if there was a delay or cancellation is also complex considering the fragmented network. “You would need to universalise the system in place for ÖBB’s NightJets, where I can combine a NightJet trip with an onward connection on to ÖBB local or regional trains to get to my final destination, all in one ticket,” explains Worth.

“At the moment these sorts of systems are generally agreed between railway firms, but when they do not want to co-operate (like between SNCF and Trenitalia, for example), the passenger loses out.”

Gastel says that all rail companies involved must participate in a “standardised booking platform and data interface” and that it will be necessary to bind rules on the distribution of fare revenues among retail carriers and on the use of alternative trains in the event of delays.

Kiefer believes that the European Union should “install a regulation on European timetabling, ticketing, and routing data”.

Further barriers include the shortage of rolling stock and the lack of standardisation for locomotives. Doppelbauer points to the Connecting Europe Express train, which ran from Lisbon to Paris from 2 September to 7 October.

“Thirty-six days, 27 countries, 20,000km and 33 borders, but this train also needed 55 locomotives because there is not one single locomotive that can run across Europe and this is the major difficulty for rail to become a true alternative to other modes of transport,” he says.

Start-ups looking to shake up the night train market also have trouble gaining traction because there is a shortage of rolling stock. Not many night train carriages have been built in the last few years, so new entrants into the market must also buy second-hand from existing rail companies, giving them power over their competition.

We need to design rolling stock that can go everywhere in Europe.

Worth’s Trains for Europe campaign is working hard to raise awareness for the lack of European rolling stock. “Let’s start with what is needed right now: a couple of hundred new 200km/h carriages would allow a lot of new night train routes to be provided within a couple of years,” he says.

Doppelbauer agrees. “We need a pool of such wagons that are flexible, so they are able to run in a variety of countries,” he says.

Creating standardised locomotives for a fragmented European marketplace brings further complications. “Rail is the only mode of transport that does not have global rules, meaning that you cannot have one single train running through the whole of Europe,” explains Doppelbauer.

“We have a particularly interesting example which is the tail end signal of a train,” he says. “In the majority of countries, it’s a reflective plate, but many require a red light, and this is just one of the differences that needs to be accommodated.”

Language presents another problem. In aviation, pilots learn to speak in standardised English so that pilots and Air Traffic Controllers of different nationalities can communicate. The International Civil Aviation Organisation (ICAO) produced an ICAO phraseology that pilots must learn and are tested for every three years.

The first step would be to define a catalogue of phrases, and I believe we could develop towards a single operational language.

“In rail, you enter France and the driver needs to be able to speak French, and in Germany, German, and so on, and this is one of the big issues we have to fight with,” he says. “The first step would be to define a catalogue of phrases, and I believe we could develop towards a single operational language, but we’re again at the question of the political will.”

Despite the complexity of the issues at play, Doppelbauer remains cautiously optimistic that a European night train could be in operation by the end of the decade.

“This night train network has to be cheap and fast to enable everyone to use it,” says Kiefer, who confirms that one of YSFT’s goals is to bring the aviation industry in line with the Paris agreement and to prevent the Earth's surface from warming more than 1.5°C.

He adds that only 1% of the population are responsible for 50% of all aviation emissions and that the people who are already affected by the climate crisis are not responsible for this damage: “We stand in solidarity with the most affected people and areas and will fight for climate justice of the travel industry.”